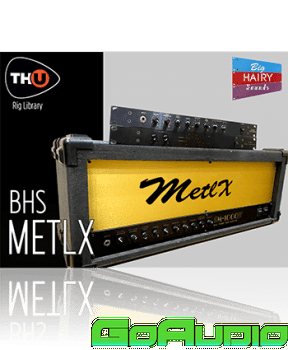 BHS METLX is the TH-U expansion library, signed by Big Hairy Sounds, seeking to recreate the tones of 80’s and 90’s guitar legends like Zakk Wylde*, Warren DiMartini*, Paul Gilbert*, and others, based on Metaltronix GP-1000*, SP-1000* rack preamp and powers amps, as well as the M-1000* amplifiers.

Metaltronix GP-1000* One of the original single channel high gain preamps originating from the Sunset Strip. Used extensively in Zakk’s original rack setup, and continued to be used by metal masters such as Alexi Laiho* for it’s tight gain and signature mid-range.
Metaltronix M-1000* the two channel head was the secret weapon of rock and metal gods during the late 80’s. It was loud and high gain evolution of the modded British heads that were used by many famous guitarists.
Marshall JCM800 & Silver Jubliee* are essential to round out the collection of ZW style tones.
The library also includes 31 patches focused on recreating the famous 80’s and 90’s hard rock and metal guitar tones.