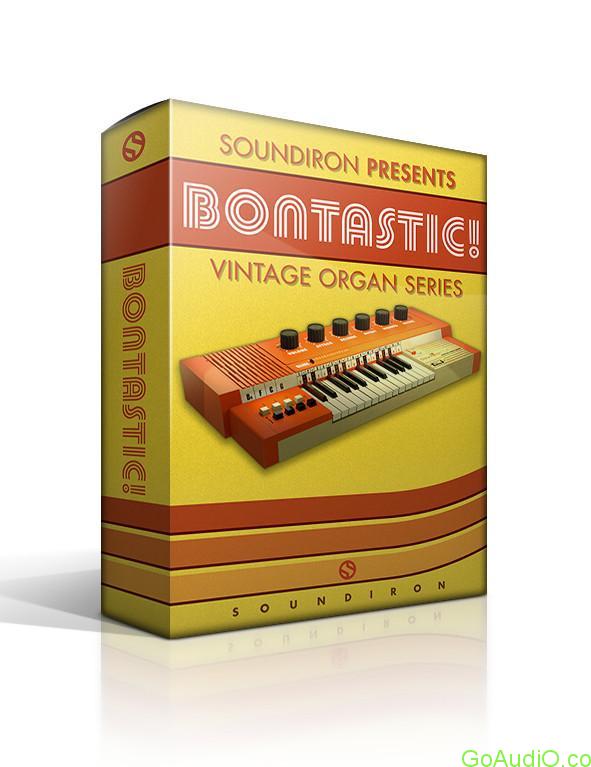 The Soundiron BONTASTIC! Vintage Organ instrument captures with perfect clarity the retro sound of the rare Bontempi B4 Electronic Table Organ. The instrument’s vivid orange plastic exterior echoes the popular aesthetics of the 1970s and early 1980s during which time the organ was produced. The Bontempi organ that Bontastic! recreates is deceptively simple — 25 keys and 8 chord buttons, no stops or options. But with Bontastic! we here at Soundiron have retrofitted a classic instrument and unlocked all the potential from a classic piece of music equipment.

The power of Bontastic! is really unlocked by the easy-to-use yet powerful 3D-modeled user interface. Basic sound shaping options are included: volume swell, note attack time, release time and sample start offset let users mold the sound anyway they want. Other main controls include vibrato and a special “Octave” knob, which really beefs up the instrument by doubling and tripling the notes being played at different octaves. This really unlocks the hidden character of the Bontempi organ.

The “Glide” option adds an adjustable-speed portamento pitch bend between notes. The advanced tempo-syncable LFO system features configurable LFO shape, modulation target, speed, intensity, and fade-in time. A versatile filter system allows you to select between 13 filter types, modulation options, and control the frequency and resonance. As always, we included our customizable arpeggiator, which lets users control pattern direction, rhythm, swing, randomization and duration. The advanced GUI is rounded out by our modular FX rack, which lets users put any of 18 different effects (reverb, distortion, etc.) in up to 10 slots, in any chain order they desire. This also includes 119 of Soundiron’s high quality impulse responses which can be loaded into the “Reverb” effect.

Contents
Bontastic! was recorded using a stereo pair of low-noise Neumann TLM 103 microphones to capture the full acoustic range of the instrument. Sustaining notes for each key were recorded with two round robins, as well as four round robins for staccato notes. The same sustaining and staccato articulations were recorded for all eight of the chord buttons (A#, C, F, and G chords, both major and minor), as well as a variety of key and motor effects. The included octave, vibrato and FX rack give you an easy-to-use interface to completely customize and shape a classic retro sound.