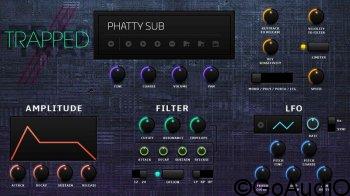 The 808 is the Constant
Often called “the successor to Dubstep” in EDM circles, the Trap musical sub-genre has its origins in the Hip Hop coming out the Southern United States, circa the late 1990’s. In the early 2010’s, innovative electronic based DJs and producers cranked the beats per minute up to 140, blended old-school Trap with Dubstep, Techno, and other EDM sub-genres and modern EDM Trap music was born. One very strong tie has always existed between the original Trap and the modern EDM version: Both are characterized by the iconic sound of the Roland TR-808 Rhythm Composer.

Raw, yet Danceable
Roland Cloud has distilled the raw essence behind the EDM Trap sub-genre and welded it to the powerful Concerto engine, providing you with a massive tool-kit for creating in this or any genre. Combining ultra-deep sampled sounds with world-class effects, TRAPPED allows you to immediately create music, or sculpt the perfect instrument sound. Chain any combination of world-class effects. There are an infinite number of possibilities at your fingertips, ready for immediate use in your current tracks or as an inspiration for future hits.

Booming Collab
For Trapped, Roland Cloud has once again teamed up with Ehud Kaldes from SyncBeats. Ehud is an expert producer, sound designer and multi-instrumentalist. Working in LA’s top recording studios, he has collaborated with some of the music industry’s biggest names. We’re excited to give you a chance to taste the latest of Ehud’s FLAVR additions to Roland Cloud.

53 Hard-Hitting Patches
TRAPPED includes 53 inspiring patches including an extensive drum kit authentically based on legendary Roland Rhythm Composers, the TR-808 and TR-9090, sure to put the boom in your tracks.