Fusing the power of technology with the organic beauty and emotion of the piano, Stratus is a vast, dynamic new instrument that will add depth, movement and colour to your music. Made in collaboration with BAFTA-winning Icelandic composer and producer Ólafur Arnalds, this versatile, multidimensional tool bends space and time through an intricate network of polyrhythmic piano performances. Awe-inspiring patterns and atmospheric clouds of harmonic refractions swell and die away at your fingertips, unfolding based on what you play and instantly sparking new ideas.

Instantly playable and easy-to-use, Stratus is presented in a bespoke interface made up of eight multi-layered piano and synthesizer matrixes, each offering a unique sonic experience — plus detailed customisation options and mind-blowing warped sounds, offering a full spectrum of emotion. 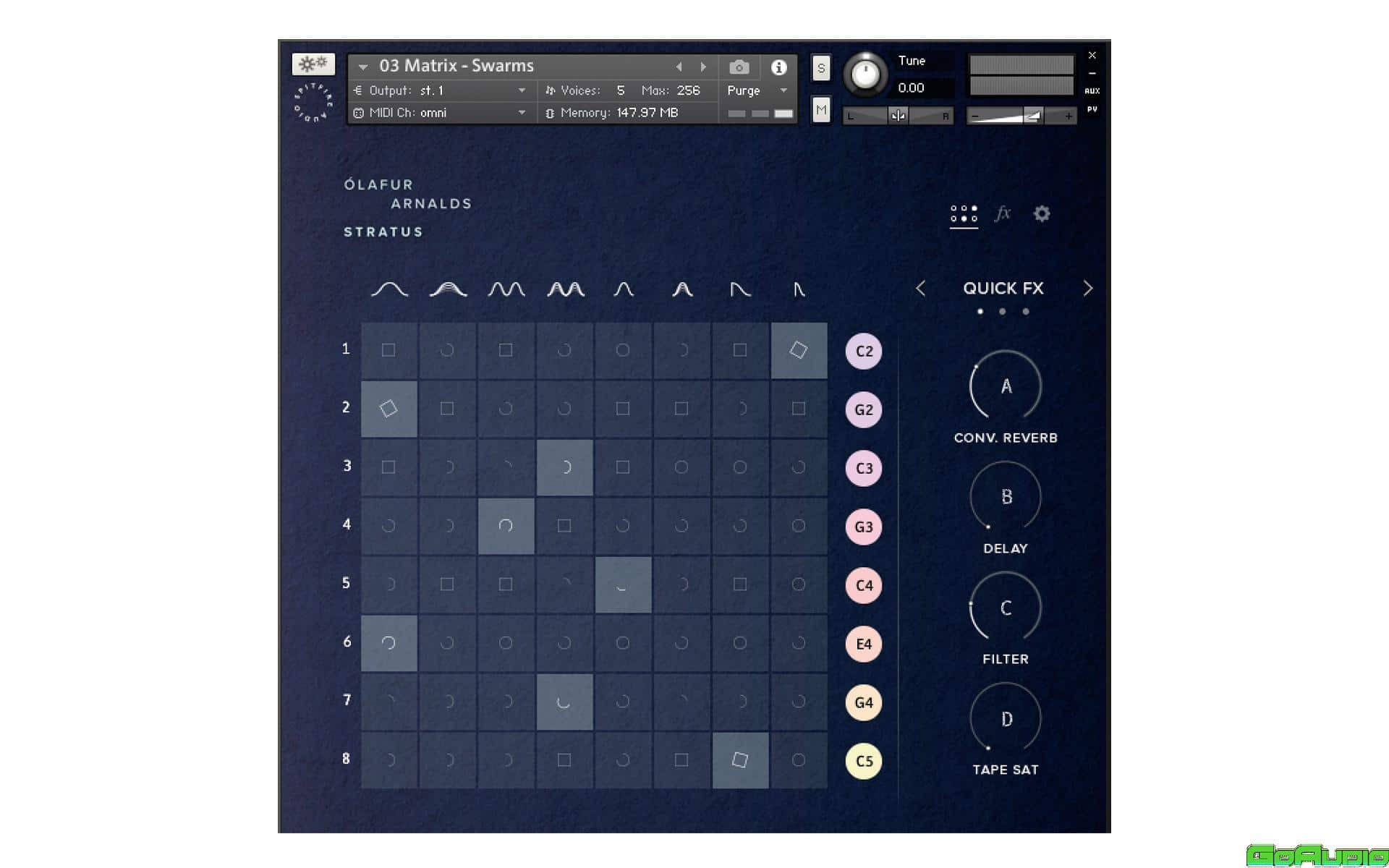 In our fourth collaboration with renowned composer Ólafur Arnalds, we bring you a brand new, multidimensional instrument, based on his acclaimed software: sophisticated midi algorithms programmed to trigger a mix of straight and syncopated rhythmic patterns of notes, on two identical self-playing pianos. Spitfire has used this model to create a highly intuitive and interactive tool enhanced with unique features, while recording full performances to capture the profoundly emotional, organic nature of the pianos themselves — instantly adding echoes of movement to anything you play, and pushing you to explore new possibilities.

Stratus makes it easy to create nuanced piano-based music from the most simplistic of arrangements. Designed to help you write music or finish that track or score, hold down a note or a chord and lose yourself in unique, inspiring clouds of harmonic refractions and rhythmic performances as they swell, evolve and die away at your fingertips. Whatever the mood you are trying to create, it offers a whole spectrum of emotion, derived from user input — from intimate loops, swells and textures to intricate rhythms falling like rain, and dreamy, expansive soundscapes.

While specially curated by Ólafur, you control how these combinations of harmonic elements develop — both by what you play, and with extensive built-in customisation options, as well as a comprehensive range of effects. The four piano-based matrixes capture the stunning organic sounds of Ólafur’s pianos, panned across the stereo field to give a true representation of the pianos in their space, seamlessly blended into one, while the four synthesiser matrixes employ the same technology to create similar patterns, with stunning tempo-locked rhythmic loops made using Olafur’s Korg PS-3100, and dreamy swarm-like textures from his Juno-60. The Randomise bar features experimental controls to further randomise Stratus’ behaviour, taking advantage of the library’s generative nature. Stratus’ versatility lends itself to solo compositions, as well as adding texture and unpredictable elements to orchestral libraries, and complementing the libraries in our acclaimed Ólafur Arnalds series.

Stratus works by taking a single note and repeating it according to a curated rhythm, splitting the rhythm between the two self-playing pianos while at the same time relocating the note up or down the octave based on a curated level of randomness, that chooses whether or not the octave should jump. Where our Evo Grid technology is triggered by note range, the Stratus matrix works by voice groups — dependent on the order in which you play the notes, and how many you play.

After suffering acute nerve damage following a car accident that left him unable to play with his left hand, Ólafur was motivated to develop intelligent custom software that could trigger self-playing, semi-generative ‘ghost’ pianos — his ‘robot writing partners’, and after spending two years experimenting with programmer Halldór Eldjárn to painstakingly perfect this technology, he incorporated it into his live show — playing an electronic keyboard on stage while his two identical pianos accompanied him to create a cascade of complementary notes and patterns, with each performance unique to each audience. The Stratus pianos also play an integral part in the sound world of his acclaimed 2018 record, re:member.

Captivated by this stunning fusion of emotive organic physicality and the ingenuity of electronic innovation, we spent several weeks at Ólafur’s studio in Reykjavik capturing these unique-sounding Yamaha DU1E3 felt-dampened pianos in their natural habitat. Rather than sampling single notes, we made full recordings of multitudes of polyrhythmic patterns and textures performed by both pianos, triggered simultaneously by algorithms, carefully curated in collaboration with Ólafur. Recorded close using vintage KM83 and Coles microphones and pristine Millenia preamps, we have retained the beautiful resonances, and full dynamic and tonal range of his distinctive sounding pianos, brought to life by stunning technology.

Ólafur Arnalds is a BAFTA-winning Icelandic composer and producer, known for pushing the boundaries of music with his unique blend of organic and electronic soundscapes. Always a keen experimenter and innovator, with musical foundations as both a heavy metal drummer and pianist, Ólafur develops chamber strings and piano arrangements with effects, loops, beats, and his own innovative, custom-built software. Based in Reykjavík, Iceland, Ólafur’s approach to sound and composition has inspired a new generation to enjoy and create modern neoclassical music.

Since his debut album, Eulogy for Evolution, in 2008, he has steadily gained recognition worldwide, both as a BAFTA-winning composer (Broadchurch, Wayne McGregor’s Dyad 1909) and as a touring solo artist, releasing on neoclassical label Erased Tapes and receiving huge acclaim for his 2018 release, re:member. He regularly collaborates with other musicians — as part of experimental techno duo Kiasmos, and releasing a series of piano and synth improvisations with fellow musician Nils Frahm.