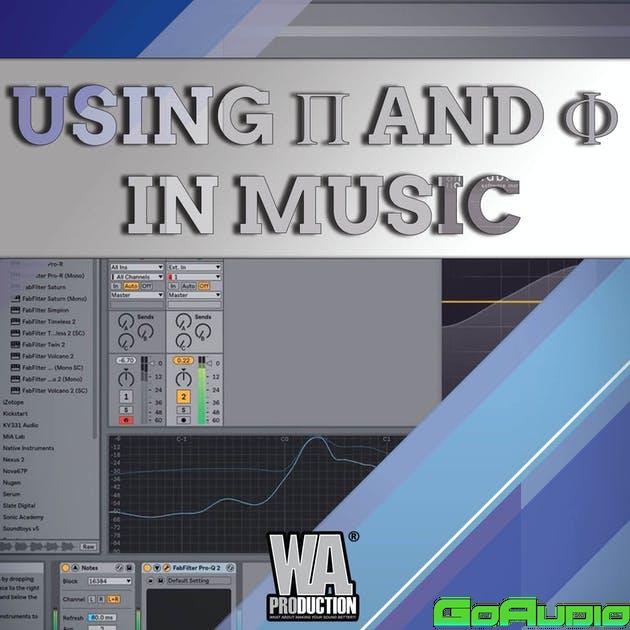 In this series we are going to explore creative ways of using the numbers π and φ as foundation for aesthetically pleasing sounds. Numbers π (3,14) and φ (1,618) are irrational numbers and they are defined by geometric construction. Both numbers express ratios used in many forms of science and art. Phi appears in, the proportions of the human body and other animals, plants, DNA, the solar system, art and architecture, population growth, the stock market, the Bible and in theology and music. Musical frequencies are based on Fibonacci ratios.

The term organic refers to the natural harmonic content of the synth and the characteristics of overtones that give it its signature sound. We are going to use the φ sequence of numbers to carve frequencies out of pure noise, and then combine them to create a capitative, natural synth patch. Those synths are perfect for many styles of electronic dance music, pop, and commercial music.

In this section, using the geometrical progress of number φ we can generate ambient sounds that occupy the listener instantly. The design of an aesthetically “beautiful” sound is a process where calculating additive and subtractive synthesis in terms of this geometrical construction. Similarly, because the human auditory system is designed with the same principles, any sound that carries these attributes is perceived as “better”. Those sounds can be used in film making, and even advertising.

Every sound needs to be treated differently to fit a mix. Especially the low-mid frequencies are a trouble to identify, and they are the most common reason for a muddy overall mix. With this technique, we can remove these areas using any equalizer, maintain the original dynamics, and achieve a natural result that sweetens percussive sounds and loops. It works on just about any sample and uses a principle of psychoacoustics that can trick the ear into auditioning compression.

This plugin is a magic touch plugin that uses the numbers π and φ as the name suggests. A ten-band interface covers the spectrum, and lets the user add on any of the selected area. The frequencies selected are given by the number φ (1.618) and the filters of those areas use π (3.141) to achieve the unique sound of this plugin. The plugin is not using measurement units because, due to psychoacoustics, the acoustical energy transmitted is greater than the electrical current affected.

The process is achieved by following the geometrical progress of φ. We are going to use it to enhance an already mastered dance track and bring out the sparkle from another dimension.